This sign has been missing the R for months. Not that I notice these things and get driven crazy or anything 😬 So yeah – I’m beginning to think this Whoppe is indeed impossible.

Ten years ago, I snapped the above picture and did some chicken reminiscing with some fellow Sackvillains. Need’s Chester Fried chicken (corner of Glendale and Cobequid) was the only place in town competing with Disco Deli for the 3 AM shitfaced partier dollar.

Fast forward to 2022 and we see the crusty old building flattened and full on construction of an apartment building on the hallowed ground.

I hope the new tenants are made aware of the impending phantom scent of chicken and tators wafting though the halls and vents. There will be “peck peck peck” on doors with nothing to be seen once opened & fuck knows what else will surface from this.

Good luck to you all and may the ghost of Chester Fried have mercy on your souls. 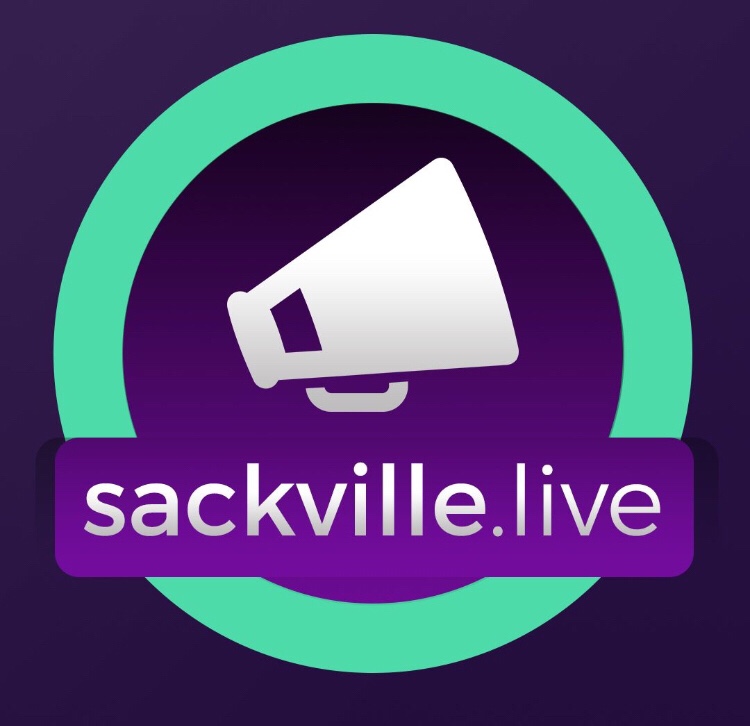 Something Fishy Going On At The Battered Fish – Closed Or Not Closed? #Sackville

Last week, I recieved a message from a resident stating Battered Fish Sackville was finished and they had let their relative go. I held off a bit posting and tried  giving them a call but to no avail.

-Pic from A couple years back
It turns out they have a sign posted on the door that reads:

“Experiencing mechanical/electrical problems with our exhaust equipment and are presently unable to operate our fryers. We are working to rectify the situation as quickly as possible.”

As of right now, no human is answering the phone.  So, which is it?  Can anyone fill us in?

Posted by Sacky on February 16, 2016 in Uncategorized.

Looks like the cheesy wheel of Sacktown pizza shops has spun again. This time, Rounders has closed up shop.

I have had many ppl messaging me about this and I waited a bit to post. I just called down and the number is disconnected so it seems the rumours are legit.

I never did get around to giving their pizza a try but did enjoy their burgers. They offered up some tasty gourmet ones and I don’t think many around here realized it. The pizza war out here is a rough one with many options and it’s hard to grab a slice of that market as a  newbie.

Anyway, best of luck to the owners and hope whatever you do in the future pans out.

Posted by Sacky on February 11, 2016 in Uncategorized.

Dammit, I really liked this place.

I had a brief online chat with one of the owners yesterday and it’s confirmed Uncles Cafe & Deli has closed.  This little place served up some tasty, fresh food and the owners are really friendly people.

It was a nice place to grab something a little different when not in the mood for fast food. I was a big fan of the Walkin’ Taco and the chicken ceasar wrap.

It’s a rough biz to survive in and I tip my cap to Tami and Nikki for giving it a go. I’m sure “Uncle” is looking down and is very proud of you. Best of luck to you both and I hope to see you around Sacktown.

Posted by Sacky on January 5, 2016 in Uncategorized.

This is just a funny story I thought I’d share with you all. Last Saturday night, I retweeted a tweet by Tinsel, our talking Christmas tree and (alleged) grouch and owner of Unfiltered Brewing from  North End Hali, Andrew Murphy, made one of the usual comments about the tree that pops up once in a while from people.  Ya know, there are still a lot of naysayers out there, mainly because of the cost of the tree. I figure it’s here, we should make the best of it and raise money and food for the needy – why the Hell not?

I was reading it all and stirring the pot a bit while having a few beers and decided to challenge Andrew to come to Sackville (gasp) and take a selfie with the tree and I would donate $50 to the food bank. It likely would have been only $20 if I was sober, hahaha!  Of course he accepts the challenge and another local tweeter who did not even know Andrew drove him in!

Not being a fan of the tree or reading the schedule, he missed a showtime but still took this pic outside Acadia Hall:

Good enough for me!

Tonight, I held up my end of the deal and took my kids and a friend of theirs down to see a show and chip in the fifty smackers. Councillor Johns was there and we had a good chuckle over the whole thing. He did want to meet Andrew though….

Gotta flash the cash for proof (Super Sackville volunteer Wade Dooley in the back) : 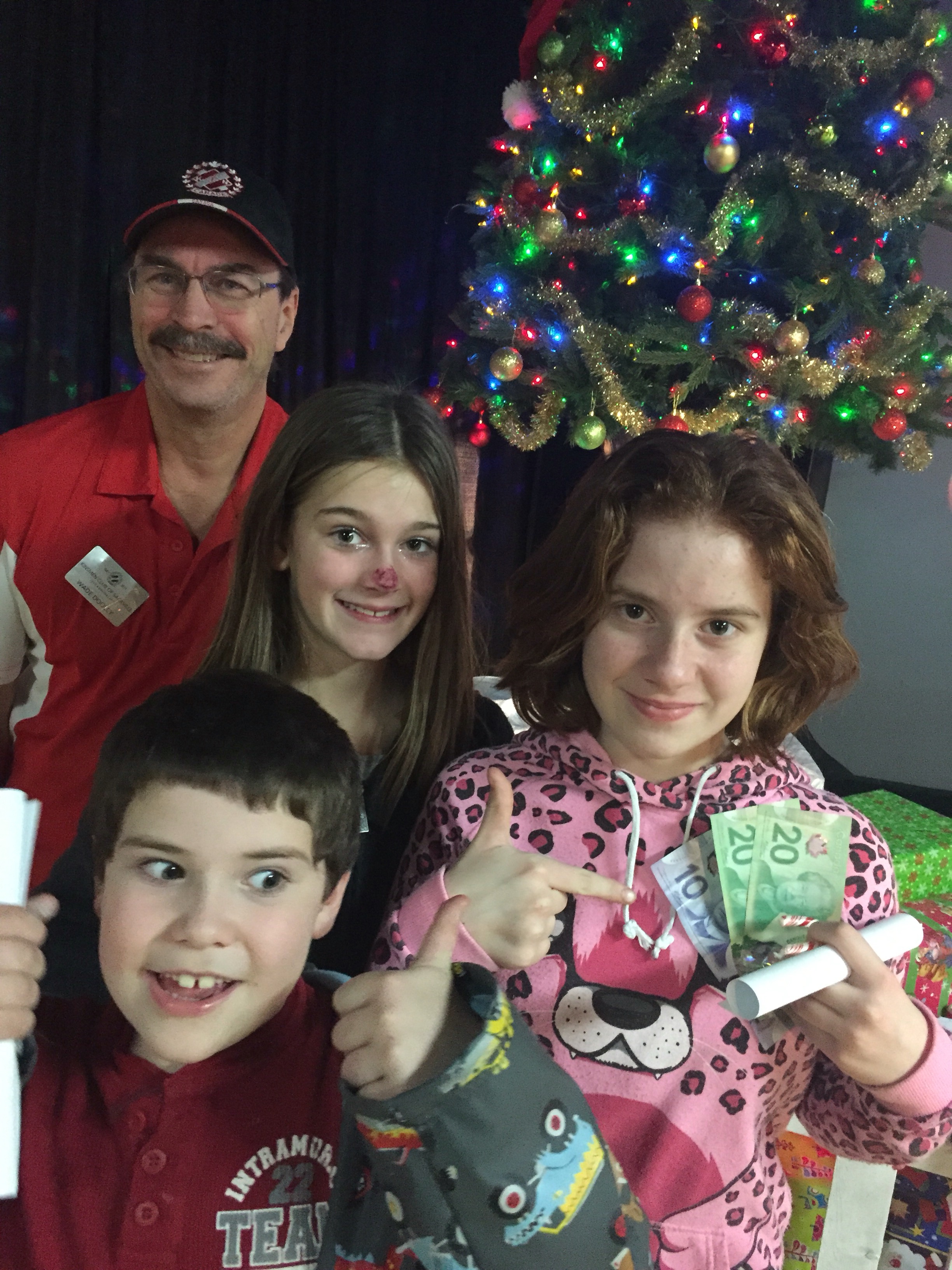 In the jug it goes:

Some of the food for the needy the tree has raised so far:

Thank you so much for being a good sport, Andrew and to Lara for driving him in. Also, great work by all the volunteers running the show!

If you are ever in Hali, check out his beer.  I always read good things about those suds and I think he’s actually an old softy but I better not publicly say it!

He did not ask for me to mention the brewery, btw. Merry Christmas, folks!

Posted by Sacky on December 18, 2015 in Uncategorized.

The yutes at Sackville High are bringing us another top notch performance. The Sound Of Music is this year’s treat.  I’ve been reading a lot of excited sounding tweets from the students and staff lately. Be sure to check it out!

You can read more about it HERE in the Bedford-Sackville Observer.  Break a leg, guys and gals! 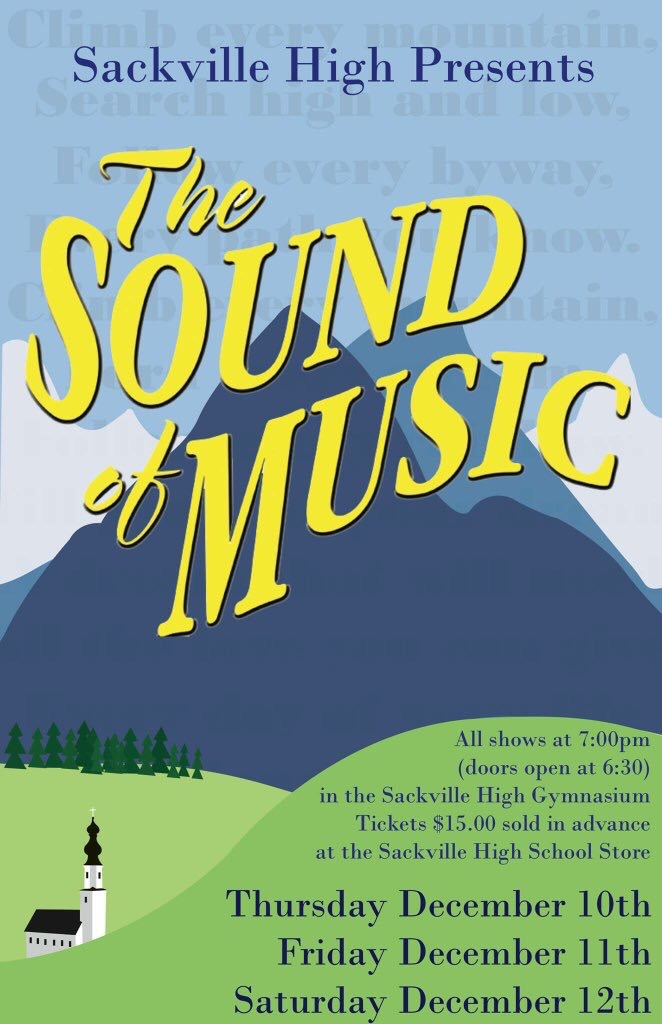 Posted by Sacky on December 10, 2015 in Uncategorized.

Some pretty amazing stuff is happening because one guy had an idea and got local business and residents involved – The AndyVent Calendar!

One of my favourite local Twitter homies is making a difference this year. Andy Bowers AKA “@evilpez4” is normally known for stirring up hilarious food convos and brilliant comments/snark about local newsy things but he is also showing he has a big ‘ol heart.

He put it out there on Twitter he is collecting 24 items for The AndyVent Calendar and it quicky took off with many local businesses that follow him immediately chipping in with awesome prizes. The plan is to collect goodies and then have people make a donation to his Gofundme page where every $5 enters your name in a draw for all the items. Every dime raised, minus the cost of the GofundMe page will be donated to Feed Nova Scotia. How cool is that?

The local business community (especially the ones on Twitter)  know and trust Andy and this has resulted in a bit of a “problem.”  He has easily gotten enough item donations to fill his calendar so he is having a midway draw for the extra goodies on Dec 12. That winner will also be put back in the mix for the big prize.

Be sure to check his  site as he will be revealing what one of the items is each day  leading up to the draw. It’s pretty fun seeing what gets unveiled.

It’s unreal what an idea can do. He set out to raise a thousand bucks and at this time, it is well over $2500 and still growing. Big shout out to Andy, the local businesses and of course, the people who are donating. By all means, feel free to donate – it’s not about the amazing prize, of course. Hehe

Remember, the main winner gets the whole thing. Midway winner gets the extra  goodies. Below is a list of all the prize donors. Some Sackville ones in there too, I see. The total value of the main prize is $1092 and the midway one is $654.  These businesses  ROCK!

Kissed By The Sea

What These Old Things

Posted by Sacky on December 3, 2015 in Uncategorized.

Posted by Sacky on November 9, 2015 in Uncategorized.